In 2007, CenterPoint was hired to assist Landlord in the day to day operation of the shopping center. The object was to stabilize the asset and Increase the revenue to prepare it for sale. The prior managing partner had left the books in shambles. A substantial amount of recoveries were unaccounted for, while tenants were paying less than required. The NOI was below market for the area, yet the property was over 95% occupied.

First, CenterPoint, assisted in hiring a third party management company to operate the property. Then, they began dissecting the financial details of the property, reviewed each lease and interviewed every tenants to established the facts. After 6 months of working closing with the Landlord’s attorney and the Management Company, CenterPoint give a financial condition report, a valuation of property and ultimately a target sales price, With all the facts in hand, CenterPoint could could clearly account for the missing rents and was able to establish a true NOI.
In the fall of 2007, the property was soon placed under contract for 7.5 cap. However, shortly thereafter, the capital markets seized and the value of the property quickly dropped over 20%. The lender decided to pull the financing from the deal thus the property fell out of contract. Due to unforseen market conditions, CenterPoint advised their client to hold the property to create a stronger basis to sell the property in the future. A group decision was made to pull the property from the market, stabilize the income, increase the NOI, and then remarket it for sale again once the market improved.

The 1st plan was to recapture the missing funds. While all of the leases were NNN, many were only paying 30-40% of the actual charges. In order to limit stress on the tenants and avoid the risk of Tenant’s vacating the property, a two year plan was established to gradually increase the nnn for the existing tenants until they were paying full recoveries. In addition, an opportunity to create a pad was identified. However, a restructure of the existing cross parking agreement was required in order to complete any opportunity. 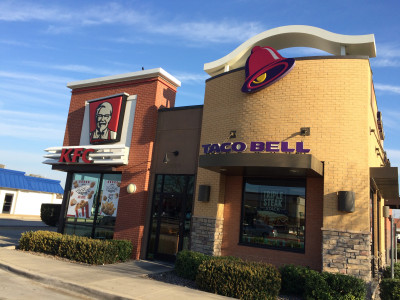 With the help of the Landlord’s attorney, CenterPoint was able to re-negotiate and modified the reciprocal easement agreement with the neighboring property owners. Within 7 days of marketing the pad site, CenterPoint had an LOI working, and within 3 months signed a long term ground lease with corporate Taco Bell/KFC. In the process, a property monument sign sat where the new user was to be located. So, CenterPoint and the management team arranged for to relocate, redesign, modernize, and increase the pylon. An additional REA amendment was also required as the neighboring property owner shared this pylon. CenterPoint arranged for the agreement and provided more property for its owner while increasing the neighbors signage at the same time.

Over the next few years, CenterPoint was directly involved in extending every lease in the shopping center. In that time, rents were increased, 100% expense reimbursements and reconciliations were collected, as well as the addition of multiple regional and national users; all with the long term outlook of increasing NOI to achieve the ultimate sale.
After 7 years of careful planning and strategic moves, CenterPoint was able to increase the NOI over 30% and ultimately arrange for a sale in 2014 for a sale price substantially higher than originally desired.

WANT TO HAVE A SIMILAR EXPERIENCE?

Search for available properties to get started or just give us a call!